Two of the club’s junior players, Giulio and Lorenzo Sahinoz, travelled to London on 13 December to see the world’s top players compete in the London Chess Classic.  Before the start of the round they were invited to meet the world number two, Italy’s Fabio Caruana, and the former world champion, Vladimir Kramnik of Russia.  Caruana provided autographs, whilst Lorenzo made Kramnik’s first move in the game. 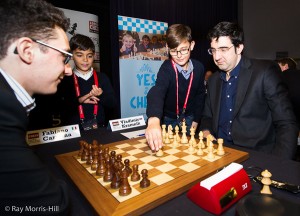