Each year the Linton Chess Club holds an internal Club Championship Competition, open to all members.  For the 2018/19 season it will be organised as a five-round Swiss tournament (all competitors play five rounds) with two trophies to play for.  The overall winner will receive the Jim Carr trophy (pictured) and the highest-placed of the lower-rated players will receive the similar John Dawson trophy. 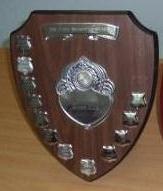