Paul Kemp reported on a very successful season for the six Linton teams, winning division 3 and the Roger Goldsmith tournament and also coming second in these competitions and divisions 1 and 2. The club also entered three teams in the East Anglian Club Championship and acquitted themselves well.

Paul presented the results of the club championship, which was won by Gavith Dharmasena on 6/6, followed by Julian Ray on 4.5 points. It was agreed to run next year’s championship as a five round Swiss, with an additional trophy (the John Dawson trophy) to be presented annually to the highest-scoring player in the lower half of the draw.

The Secretary said that Linton had had the most successful season ever!

The club had won the first, the second, the third division and the Roger Goldsmith 2 competition in the Bury League and also the Jamboree in the Cambridgeshire League. All members of the club were to be congratulated on this achievement.

The Secretary presented George with the shield at the Annual General Meeting. 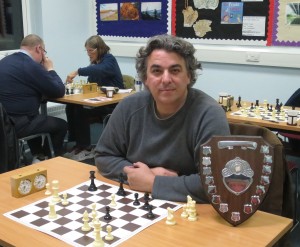 Bury League results for the club were :-

The Bury League announced Paul Kemp as Division 2 player of the year.  Patrick Ribbands was placed third in the same list.