The Linton chess club and players have achieved a clean sweep in the East Anglian Championships (covering Norfolk, Suffolk, Cambridgeshire, Bedfordshire and Hertfordshire) by winning all three main events.  I’m sure this has not been achieved by any club before.

Over the weekend of 7/8 March Chris Davison won the individual title and Aarnavh Trivedi won the junior championship.  And on 15 March the Linton Tigers team of Ashley Stewart, Chris Davison, Kevin Clark and Paul Kemp convincingly won the team championship.

We also had success in the supporting events.  Yoav Pilowsky-Bankirer won the other junior award on 7/8 March, the prize for the best junior graded under 170.  And at the team championships the Linton Bears and the Linton Wolves both shared first place in their respective grade-limited events.

Sarah Weersing and Gavith Dharmasena are presented with the Bob Jones trophy which they won at the 2019 Bury St Edmunds Congress. They both scored 3.5/5 in the Major Tournament and were the highest-placed juniors from the Bury and Suffolk Leagues to score more than 50%. Making the presentation is Congress Secretary Steve Lovell (left) and Bob Jones, who was the Congress Director for 16 years.

Fourteen Linton players competed in the Cambridgeshire Rapidplay at Whittlesford on 29 September, of whom seven were prizewinners.

In a strong Open Tournament two juniors, Giulio Sahinoz and Aarnavh Trivedi, shared both the junior prize and the grading prize, scoring 3/5.  This was remarkable in that in a field of 21 players everyone else was graded at least 15 points higher than them.

In the Minor Tournament Rob Davies shared second place.  Also competing creditably in the Minor were five Linton juniors, with newcomers Annchen and Cailynn Jones narrowly missing out on the prizes.

Gavith won the Club Championship to retain the title. In the picture, Gavith is presented with the Jim Carr trophy by club secretary Margherita.

Margherita presents the John Dawson trophy for the highest-placed player in the lower half of the draw to Alan Wadsworth, recently returned to the club he originally joined in the early 1980s. 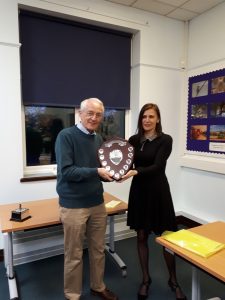 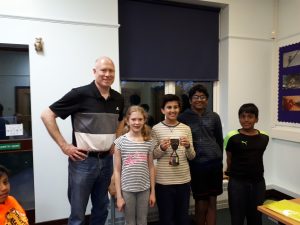 The Linton club had a successful season and Linton members achieved distinguished themselves in local and national events. We have a particularly strong junior section, and as I write this three of them (Gavith and Kian Dharmasena and Aarnavh Trivedi) are preparing to represent England in the European Junior Chess Championships in Poland at the beginning of July.

First the team news. We narrowly failed to win all three divisions of the Bury Area Chess League, finishing a close second in divisions 1 and 2. However we were first and second in division 3, and expect to have both teams promoted as we enter two additional sides in division 3 for the 2018/19 season. Kian Dharmasena was the third division’s player-of-the-year, scoring eight wins, one draw and no losses.

The Linton Lions and Linton Tigers each won their respective sections of the grade-limited Roger Goldsmith Tournament, with the Lions winning the final. Three teams played in the East Anglian Club Championships, gaining two second places and one third in their respective divisions, a very creditable performance as four juniors made their debuts for the club.

There were many individual highlights, so apologies for those I have missed, but in rough chronological order I’ve picked out the following. In September Giulio Sahinoz, Aarnavh Trivedi, Gavith and Kian Dharmasena (together with Cambridge player Arnav Srivastava), playing as Cambridge Knights, won the 4NCL Junior Congress against stronger and older junior players. In January Aarnavh, Gavith and Kian repeated their success, playing this time with Arnav Srivastava and Julia Volovich from Cambridge.

Following on from winning the Danish Girls’ Championship Abigail Weersing scored 5/5 in the Minor Tournament at the Bury St Edmund’s Congress, the only player to get a perfect score. Twelve Linton players competed in the Cambridgeshire County Championships in November, with Peter Koiza coming second.

Finally, congratulations to Gavith Dharmasena (again) for winning the club championship with a perfect score of 6/6. We look forward to the next season!

Paul Kemp reported on a very successful season for the six Linton teams, winning division 3 and the Roger Goldsmith tournament and also coming second in these competitions and divisions 1 and 2. The club also entered three teams in the East Anglian Club Championship and acquitted themselves well.

Paul presented the results of the club championship, which was won by Gavith Dharmasena on 6/6, followed by Julian Ray on 4.5 points. It was agreed to run next year’s championship as a five round Swiss, with an additional trophy (the John Dawson trophy) to be presented annually to the highest-scoring player in the lower half of the draw.

“Abigail Weersing was the only player among 169 to win all five of her rounds on her way to winning the minor section (fourth tier) of the competition at The Apex at the weekend.”

Follow link for full story from the Haverhill Echo.